Back in February of 2020, we went on a spectacular trip to Costa Rica. I’ve thought about that trip a lot over the last year. We’d initially thought about going over our kids’ spring break in late March, but the cheapskates in us decided to just take the kids out of school and go when it was cheaper. I am so, so glad we let our cheap side win. As we’ve gone through this pandemic, we’ve become pretty nostalgic about the trip. We’ll often make casados or chocoflans when we need a pick me up. We have even pretended to go to Costa Rica for more than one person’s birthday.

In the winter, we are heavy consumers of hot chocolate and herbal tea. We just had the worst snowstorm we’ve had in almost 20 years and so we’ve been drinking a lot of hot beverages at our house. (Since we’ve only lived here for 11, it was the worst storm we’ve seen.) When we were in Costa Rica, we had a really good ginger tea our hosts called agua dulce served along empanadas. Agua dulce means sweet water. When we came home in between snowstorms (gotta love Colorado winters) I searched all over the internet trying to find a recipe for agua dulce and kept coming up dry. I found a recipe that sounded similar, but with a much less pleasant name – agua de sapo or toad water. The first time I made the tea, the ginger was so strong I could hardly drink it. I don’t mind a bit of spice from my ginger, but wow that tea was like a punch to the face. I’ve played with the recipe and came up with what you see here. A sweet, gingery tea that reminds us all of warmer, more carefree days. I’ve made notes about ginger and brown sugar amounts so you can dial the spice and sweetness up and down as you see fit. 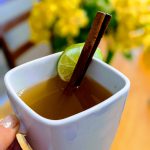