We have a slight cheesecake obsession here at The Dirty Dish Club. We have a few cheesecake recipes in the archives and every year we throw a big cheesecake party to celebrate National Cheesecake Day. Every once in awhile, someone new to our invite list will ask how this all got started. The short story is, cheesecake is a tradition in my family of showing love. The long story is a little more complex.

My father is a school teacher. I am one of four children. Providing for that size of family on a teacher’s salary meant our family lived by a budget. When it came to food, my mom was a good cook so even though we used cheaper ingredients baking purists would scoff at (shortening instead of butter, imitation vanilla, 1% milk, etc), we never felt deprived. Once a year on my birthday, my mom would buy bricks of cream cheese and bake a fancy cheesecake for my birthday. The cake was so rich and I felt so special and loved to be honored with such a rare treat.

For almost 30 years, my parents were co-coaches of the town’s girl’s cross-country team. In the late 90s, the trend of athletic camps reached my hometown. For the most part, attending such an expensive camp was not an option for most of the girls on my parents’ team. Instead, they decided to put on their own running camp. A very affordable day camp that was only possible due to their expert budgeting skills and free labor. There was delicious food, expert speakers, t-shirts, as well as fun activities and workshops. At the end of the camp, all the girls would go on a long run – usually the longest they’d ever done ranging from 8-14 miles depending on the girl. Afterward, there would be a brunch buffet of smoothies and cheesecakes galore – all of which had been made by my parents. Most of the girls probably had no idea how many hours my parents spent putting everything together, but as they lounged in our yard eating cheesecake and bonding with their teammates, they felt a sense of belonging and accomplishment.

When Noel and I got married, my parents, true to form, DIYed as much as possible. My photographer/artist mother took the photos and decorated the church. My dad did whatever my mom said and made close to twenty cheesecakes to be served at our reception. I don’t think most people even realized how much time and love were poured into everything.

As an adult, I’ve learned that cheesecakes are not for the novice baker. They take a lot more time than a batch of cookies. They require special pans and depending on how deep you’ve dove into the art of cheesecake making you may be adding extra steps – warming the ingredients to room temperature, cooking in a water bath, etc – in an effort to prevent cracks. For many, cheesecakes are intimidating. For me, cheesecakes were a birthright. When I discovered there was such a thing as a National Cheesecake Day six or seven years ago, I couldn’t resist celebrating. (It’s July 30th in case you want to mark your calendar for next year.) The celebration has ebbed and flowed over the years sometimes being a giant celebration where we rent a pavilion at a park and other times being a smaller affair with just a few close friends, but it is always a celebration of friendship and laughter. This year, Coronavirus made a get together seem really irresponsible and I was so sad about it. We’ve been really trying to social distance as much as possible which I’m not going to lie, has been an emotional struggle at times. For some reason, losing Cheesecake Day was just too much to bear. I kept thinking, now more than ever people need the joy and love that cheesecake represents to me. Instead of getting everyone together, we decided to drop cheesecake off at some of our really good friends’ houses and exchange a few pleasantries from 6 feet away. We were out for three hours delivering cheesecakes and didn’t eat dinner until after 9pm, but our hearts were so full.

Every year, I try to make a new cheesecake or two and this Hazelnut Nutella Cheesecake was this year’s success. I tried my hand at a Nutella cheesecake last year and it was too chocolatey even for someone with Noel’s love of chocolate, so I knew I wanted to tone it done in this year’s attempt. The crust is a blondie hazelnut crust. The batter is hazelnut flavored with dollops of nutella mixed in. Then you top the whole thing off with nutella whipped cream and optional Ferrero Rochers. (Both of which can cover a multitude of sins if any cracking did occur.) I’m going to declare this my new favorite cheesecake. 2020 has been pretty bad, but this is one of the best things to come out of it. 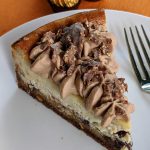 Water baths – I’m not as fond of water baths lately. I like what water baths can do for the outward appearance of a cheesecake – it makes it smooth and flawless, never a crack in sight. BUT, I actually prefer the texture of cheesecake not cooked in a water bath since it has a little more structural integrity to it – a firmer crust, a more solid cake. These days, I’ve been using the steam function on my oven for an in-between option. The cake is slightly less creamy and more prone to cracks, but that can easily be covered up with the topping. Prior to having a fancy oven with a steam function I would simply fill a pan with water and put it on the rack directly under the cheesecake. Creamer – I use powdered creamer because that is what I have on hand. If you would like to use liquid creamer, I recommend you use it in place of half of the cream in the recipe.