In my last post, I mentioned we just got back from a trip to the Oregon Coast. It was a glorious week of cool temperatures, runs on the beaches, and high berry consumption. Since it was a vacation, we indulged ourselves with lots of tasty food. Here is the recap of our vacation told in food. 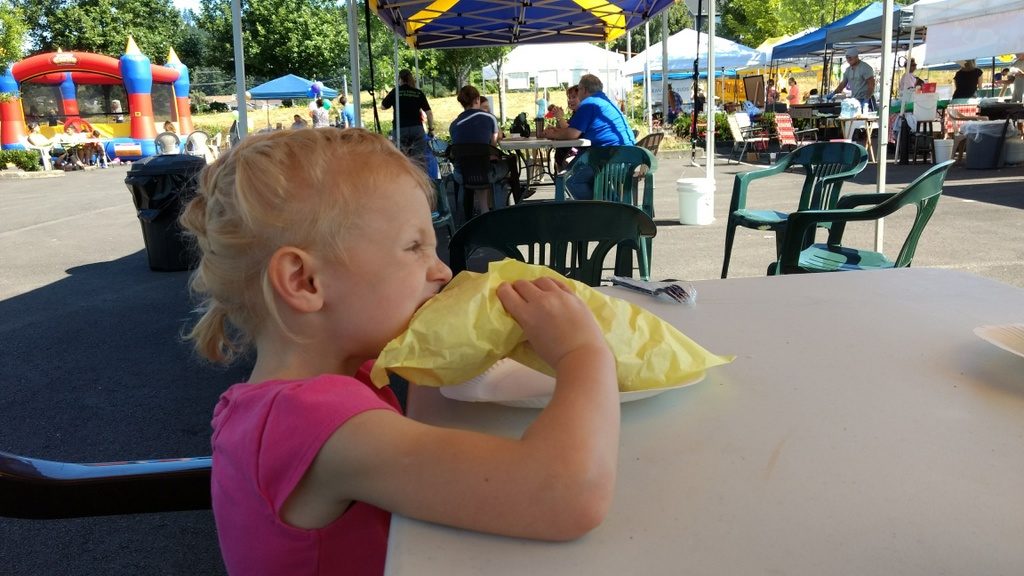 We flew into Portland and spent an entire day there. Five years ago, we went to Oregon and went to an amazing farmer’s market at PSU and we knew we wanted to go again. Things just grow so much better in Oregon than they do in Colorado. We were staying in Clackamas and had arrived at our hotel at 2am. When we all aroused from our sleep comas in the morning we weren’t sure we were up for a trip into Portland and a crowded, vibrant market. A quick google search helped us find a closer, more low-key market. We drove over to the Happy Valley Farmer’s Market where I coveted all the beautiful, yet inexpensive bouquets of fresh flowers. We purchased some breakfast burritos from a friendly couple and listened to the live music. We also picked up some kale for an upcoming dinner and some glazed nuts and gigantic honeycrisp apples for a snack. The breakfast burritos were so big the kids couldn’t finish theirs so we took them back to the hotel and stowed them in the mini fridge for the next day. 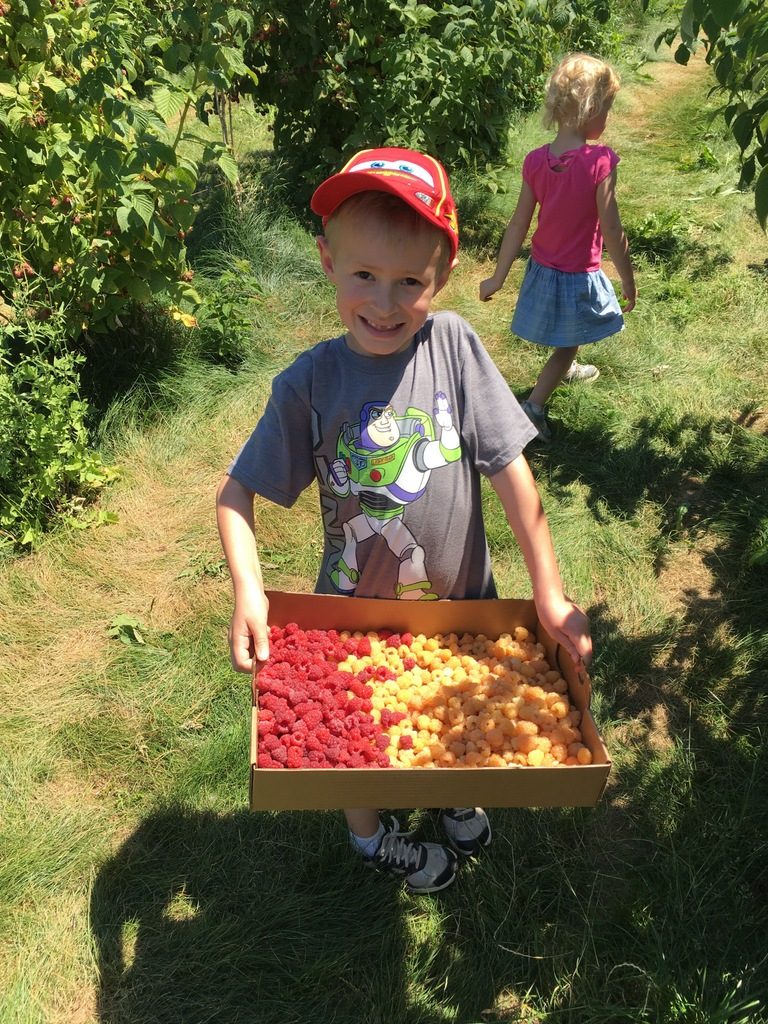 Next up, we went to pick some berries at Suavie Island farms. The berries were $2.50/lb which is so cheap compared to what we usually pay for berries. We have a tiny thicket of raspberry bushes in our yard and we get really excited when they produce a handful or two of berries. When we walked into the rows upon rows of bushes laden with raspberries we realized how sad our little thicket truly is. Our son, Cooper, would subsist on berries if given the choice; he was in heaven. 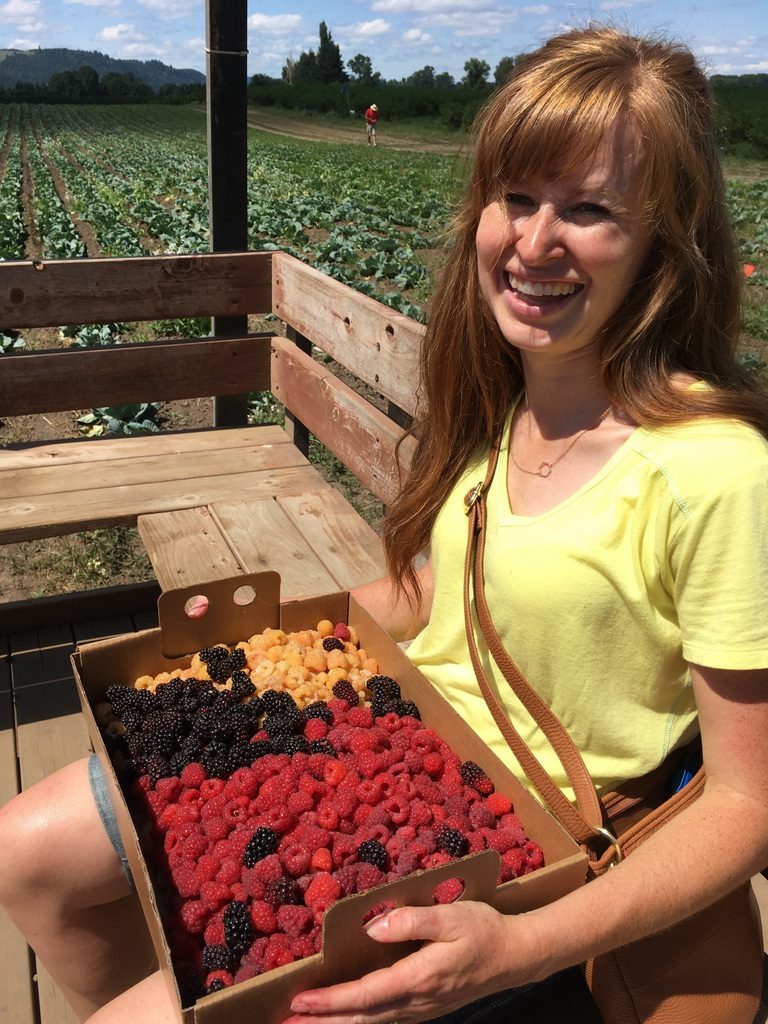 We spent a few hours in the fields picking golden raspberries, red raspberries, blackberries, and blueberries. We were so into it that we picked 17 lbs of berries! Fortunately we were meeting up with my family on the coast so the abundance of berries wouldn’t be a problem. 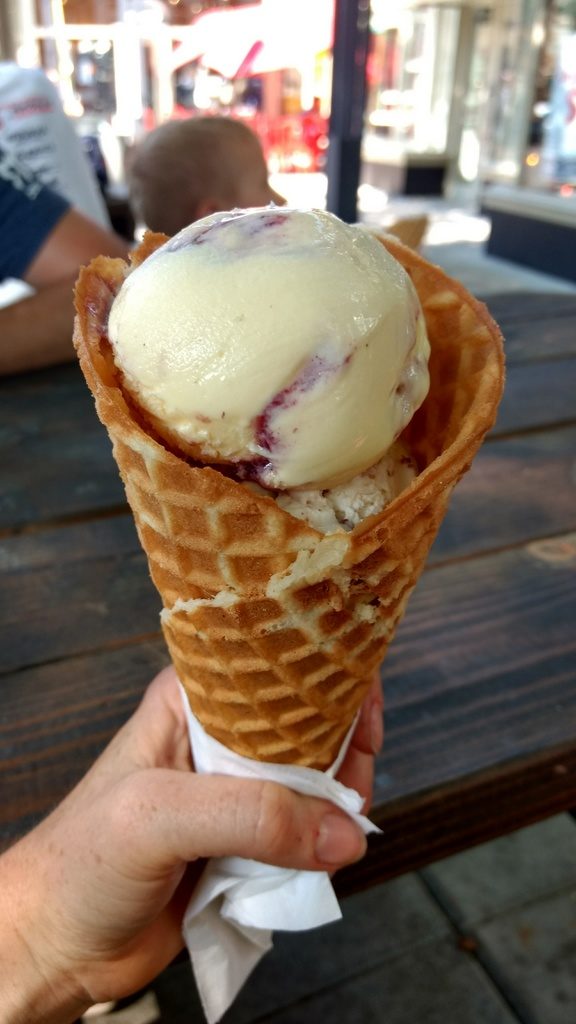 After all our hard work in the sun, we went to Salt & Straw. I’d been on the fence about whether we should go there. I’m not a huge fan of lines and I worried it was one of those  trendy, overhyped places. When Noel  discovered they currently were dishing up goat cheese marionberry habanero ice cream though, he was sold. 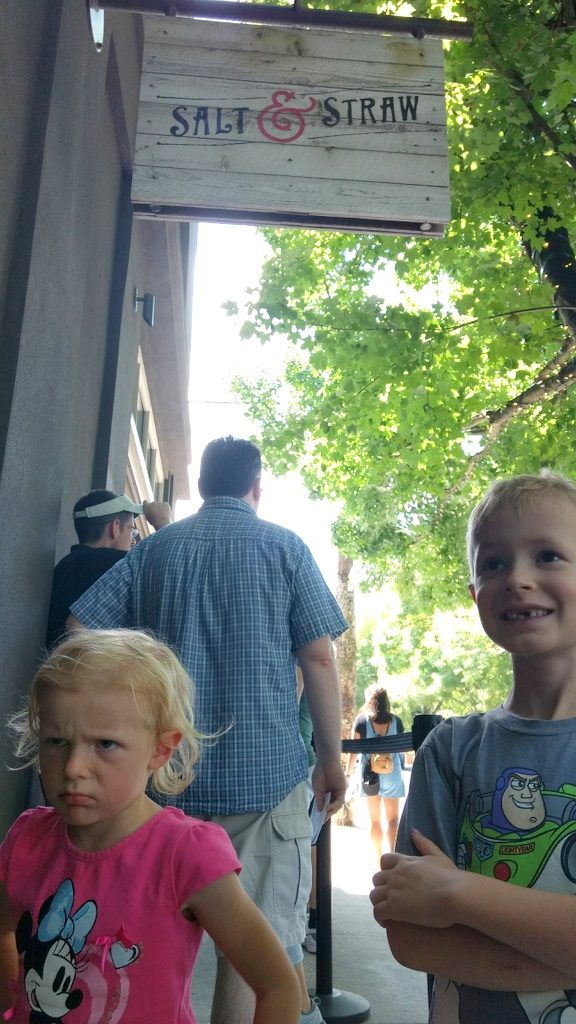 The line ended up not being terrible, although Ellen might not agree. We waited around 30 minutes and they brought out samples of honey lavender ice cream while we waited. When we got closer to the counter they let us try as many flavors as we wanted. 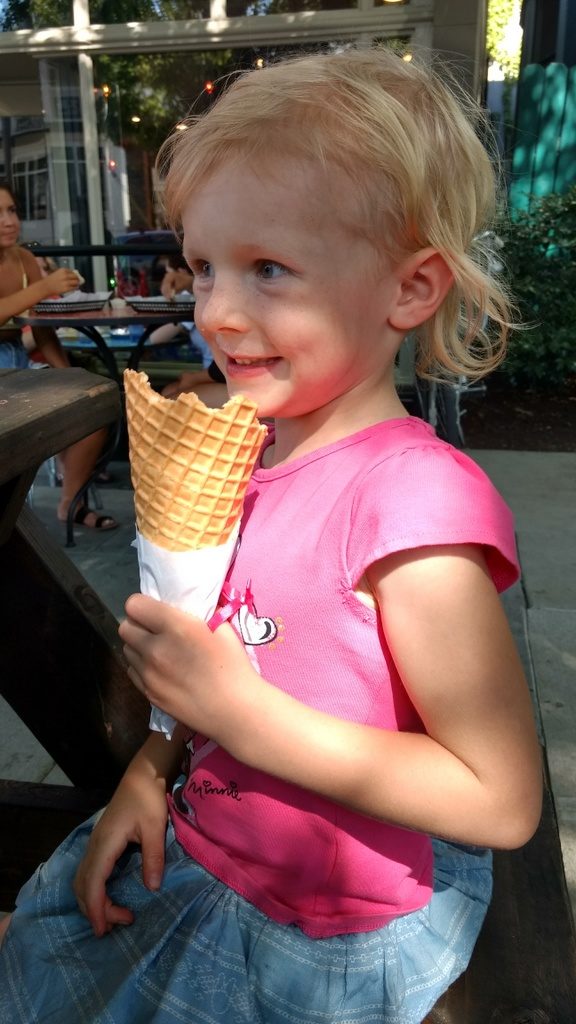 Noel, of course, got the goat cheese marionberry habanero ice cream (a July feature), Cooper choose chocolate gooey brownie, Ellen choose fresh cheese and strawberries (another July feature), and I did a split scoop of Meyer Lemon blueberries with buttermilk (also a July feature) and almond brittle with salted ganache. We splurged on waffle cones since the smell of them baking was too tempting. All of the ice creams were delicious and if I can figure it out, I would love to recreate some of them. 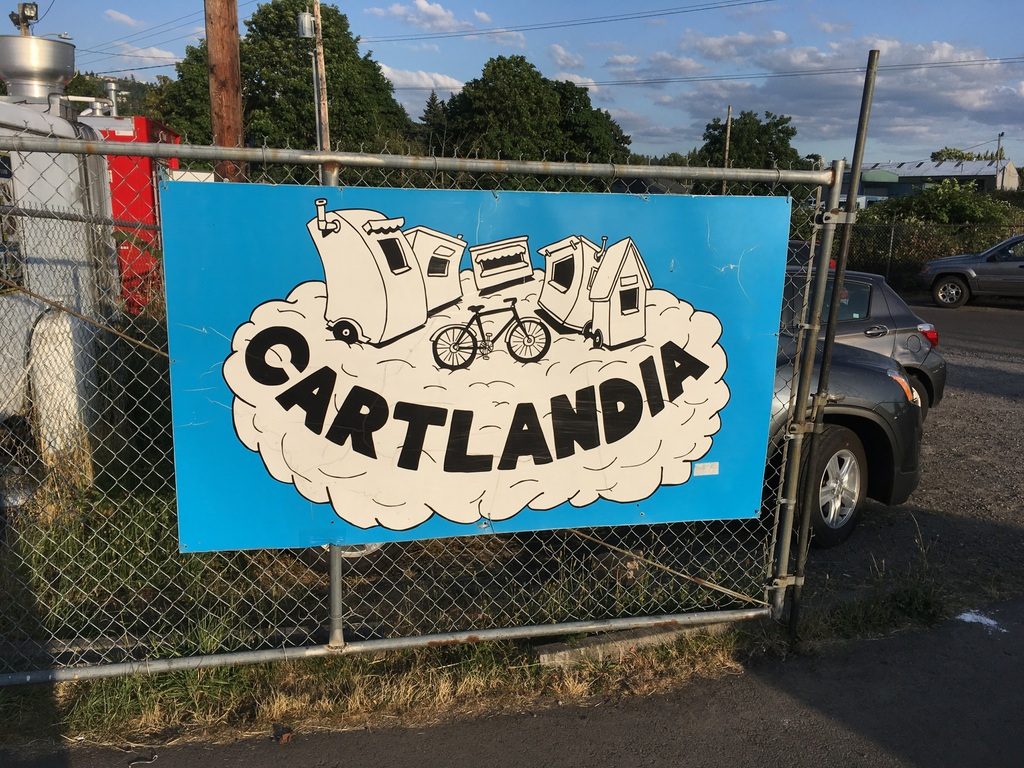 That night we went to Cartlandia, a large pod of food carts. We were all out of whack from our late night flight so we arrived kind of late and many of the carts were already sold out. Still, there was some selection and we had a dinner of Indian food and BBQ. 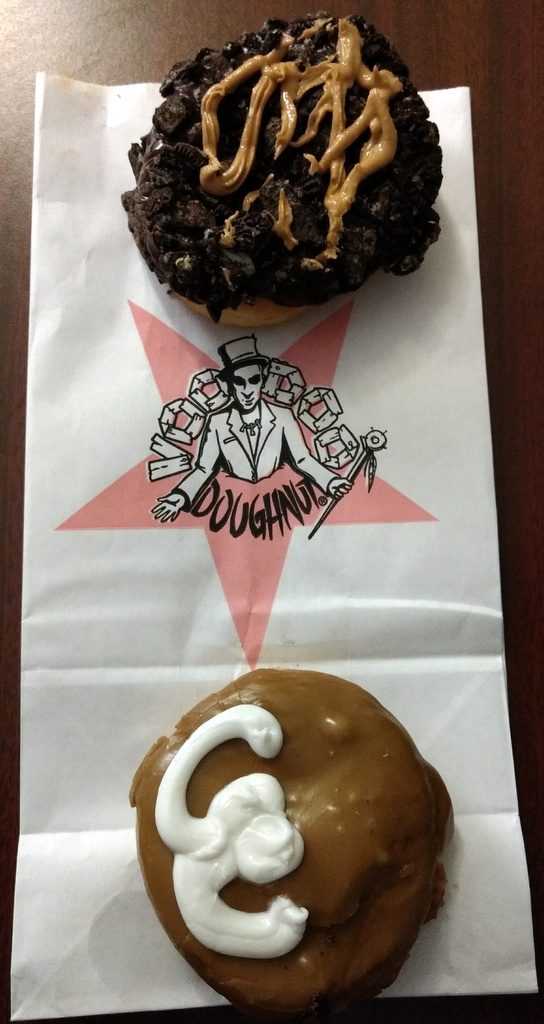 For dessert, we snagged some Voodoo Doughnuts. We actually have a Voodoo doughnuts in Denver, but we’ve never been because of our disinterest in lines or driving far for dessert.  Since the Voodoo food cart wasn’t busy, we decided we needed to try them. We honestly didn’t feel like the doughnuts we got (an Old Dirty Bastard and a McMinivile Cream) were that special, but we’re more cake donut fans than raised donut fans. (For anyone local, our favorite donuts come from LaMar’s.) 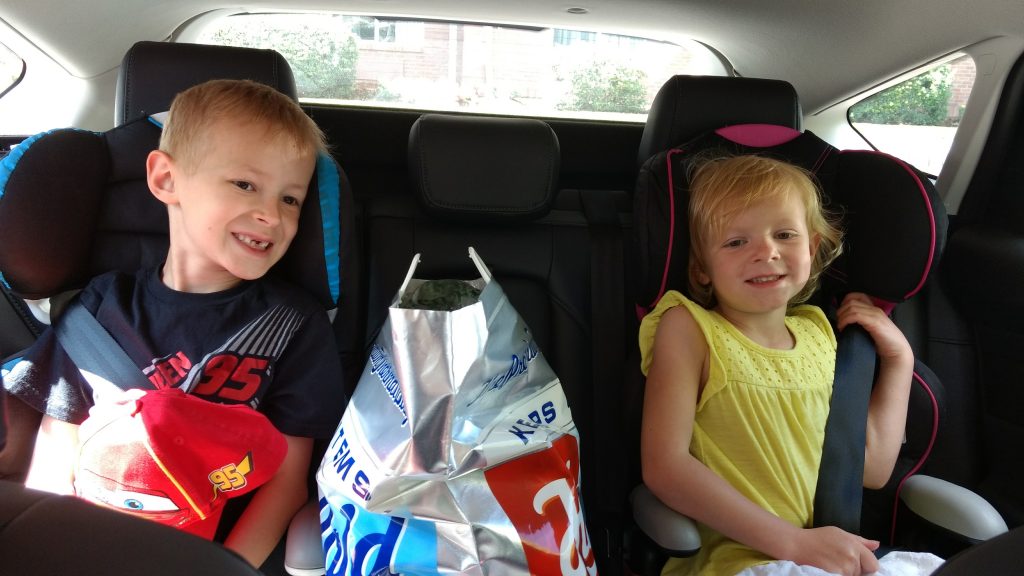 The next day we headed to the coast with our berries. To transport the berries, we picked up some tupperware from Target, a cooler bag from Winco, and packed that bag full of ice from our hotel ice machine. 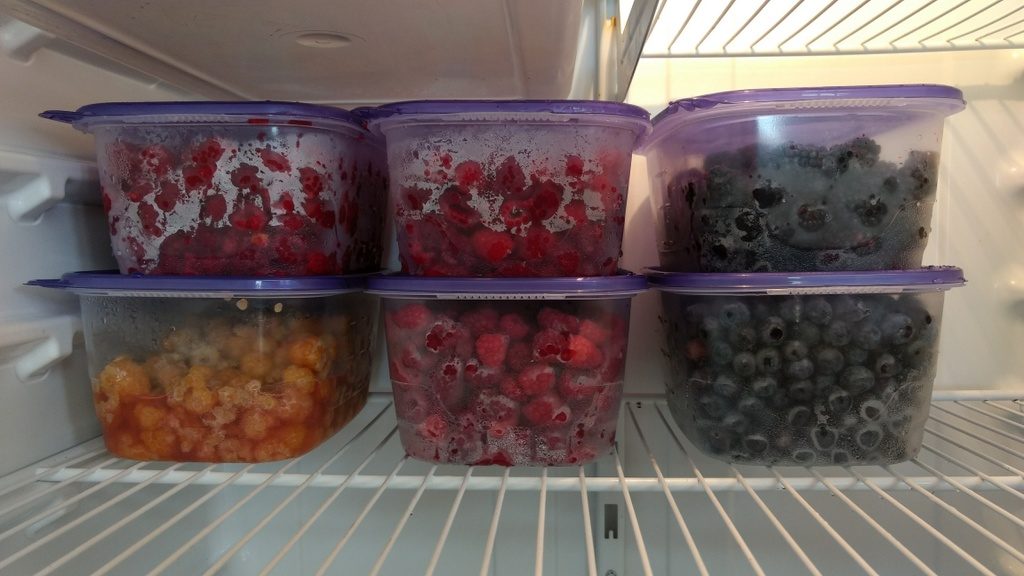 They all made it fairly safely to the town of Manzanita where we stowed our berry reserve in the fridge. 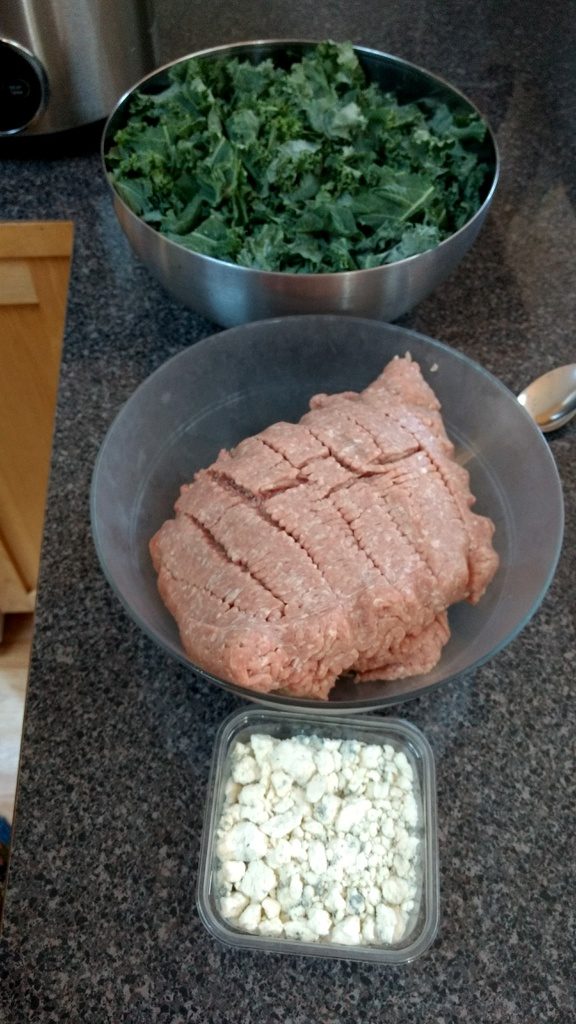 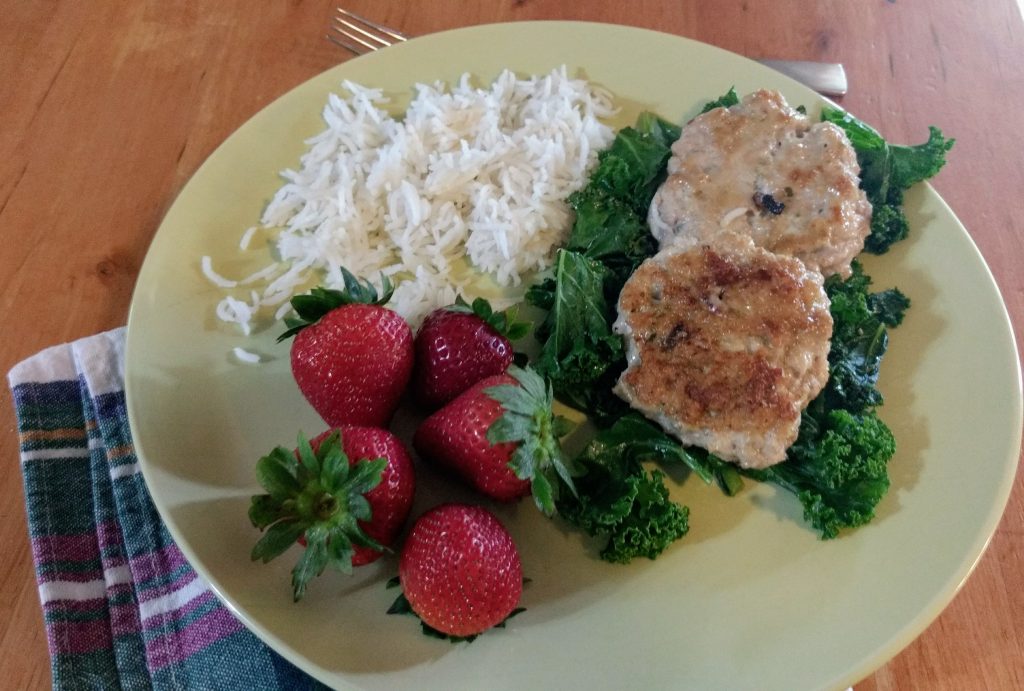 We were in charge of dinner that first night. We made blue cheese chicken sausage patties with sautéed kale from How to Cook Everything Fast. Noel first made this meal for our family about a year ago because we happened to have the ingredients on hand. Admittedly, I was not very excited about the dish, but was pleasantly surprised. We’ve fed it to several groups of people and it always gets rave reviews and even our kids will eat it. 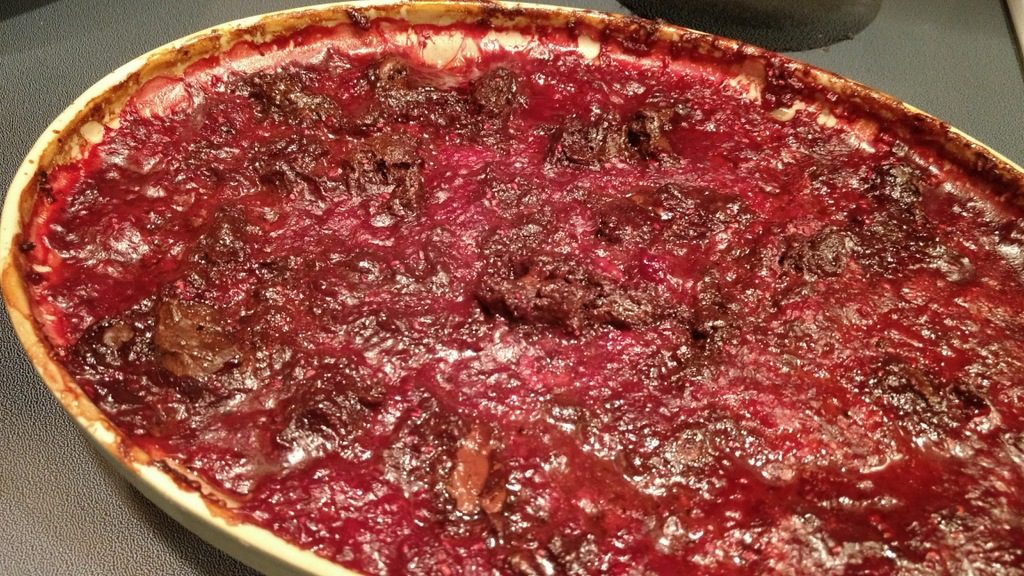 For dessert, we put some of those berries to use in a Dark Chocolate Raspberry Cobbler 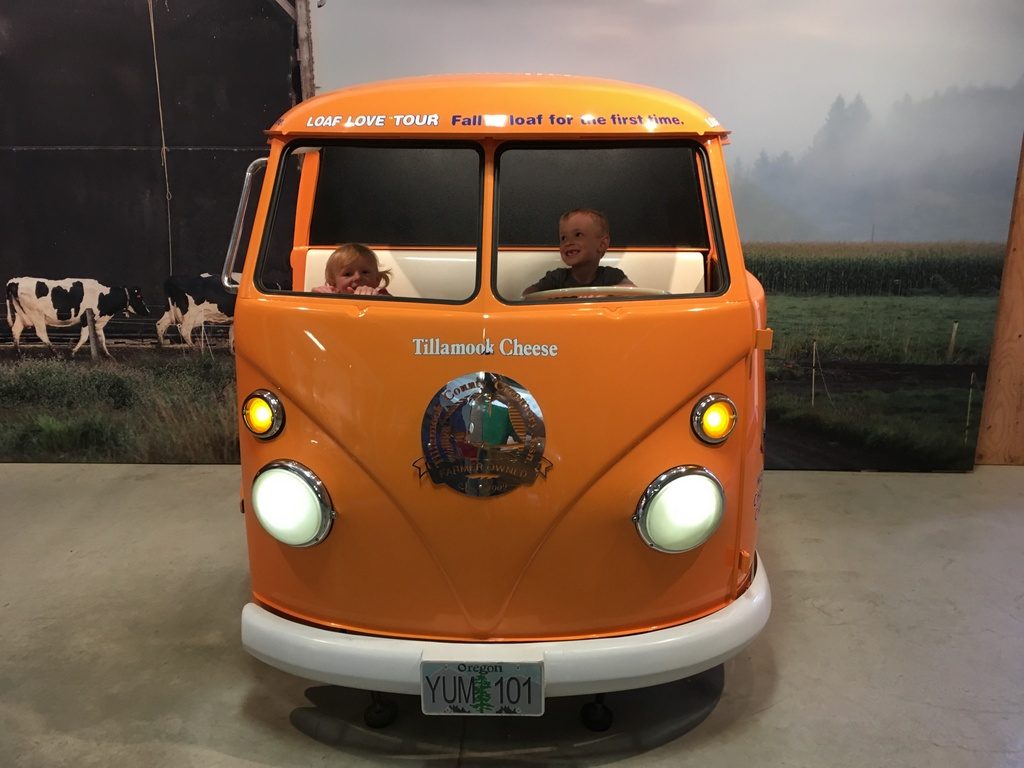 The next day we visited the Tillamook Cheese Factory. Ellen, our cheese lover was in heaven with all the samples. We picked up some discounted black peppercorn cheese ends and some cheese curds. As far as we are aware, there is a sad lack of cheese curds in the Denver metro area. 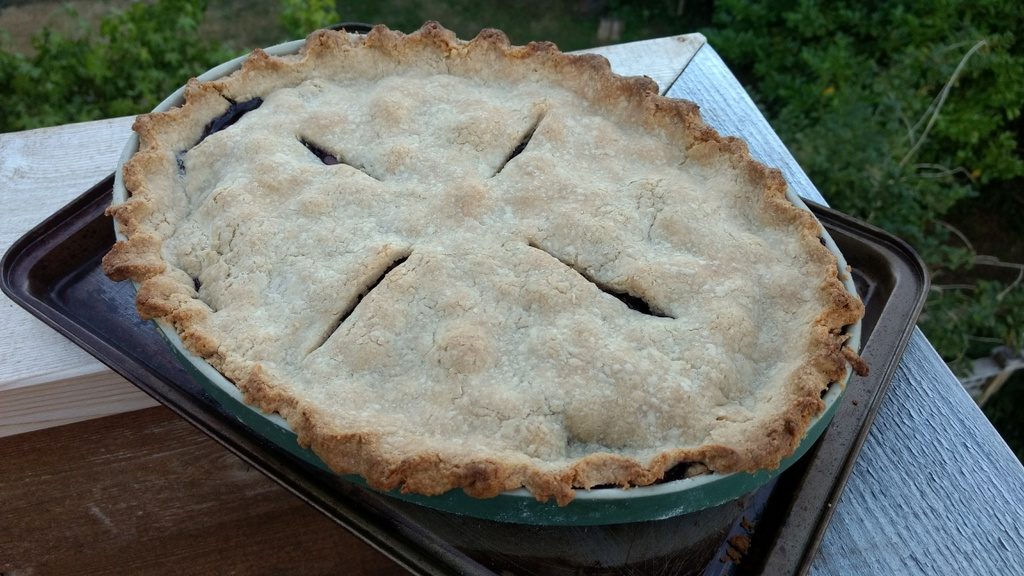 That night we made a huge blueberry pie for the family. 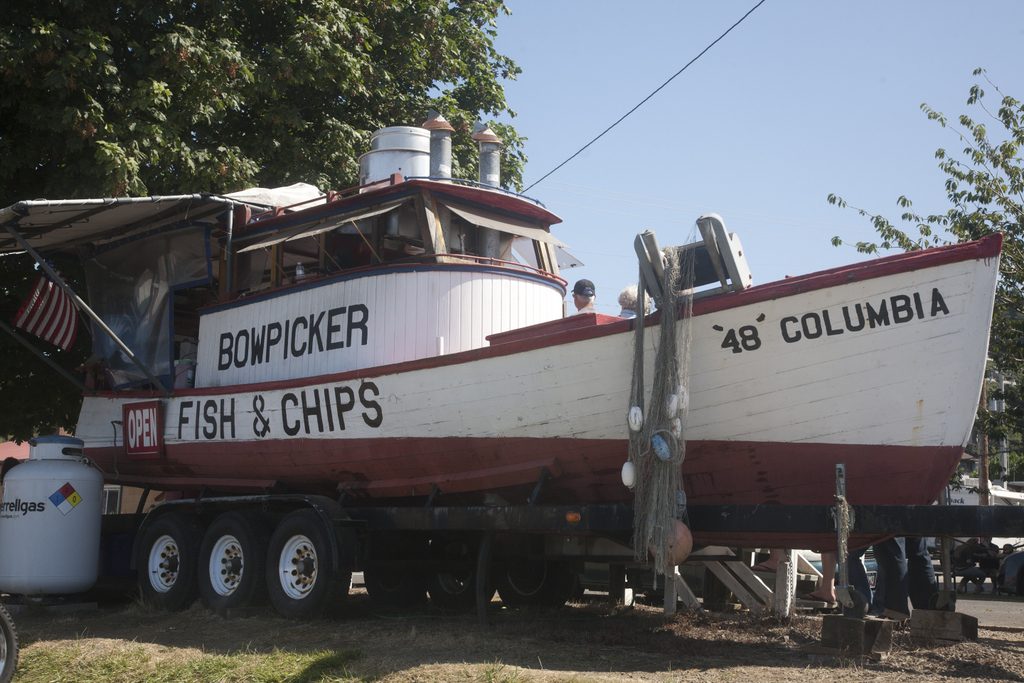 Later that week, we went to Astoria. We got fish and chips from Bowpicker Fish and Chips. It’s a ship in the middle of parking lot, but it serves up good grub. Their lines can get long, but we got there right as they were opening for lunch and didn’t have to wait. The fish and chips are fresh and served in generous portions. We got 2 1/2 baskets and it was slightly more than our little family could stomach. If you go there, make sure you take advantage of the malt vinegar and the seasoned salt they provide as they don’t add a ton of seasonings during the frying process. 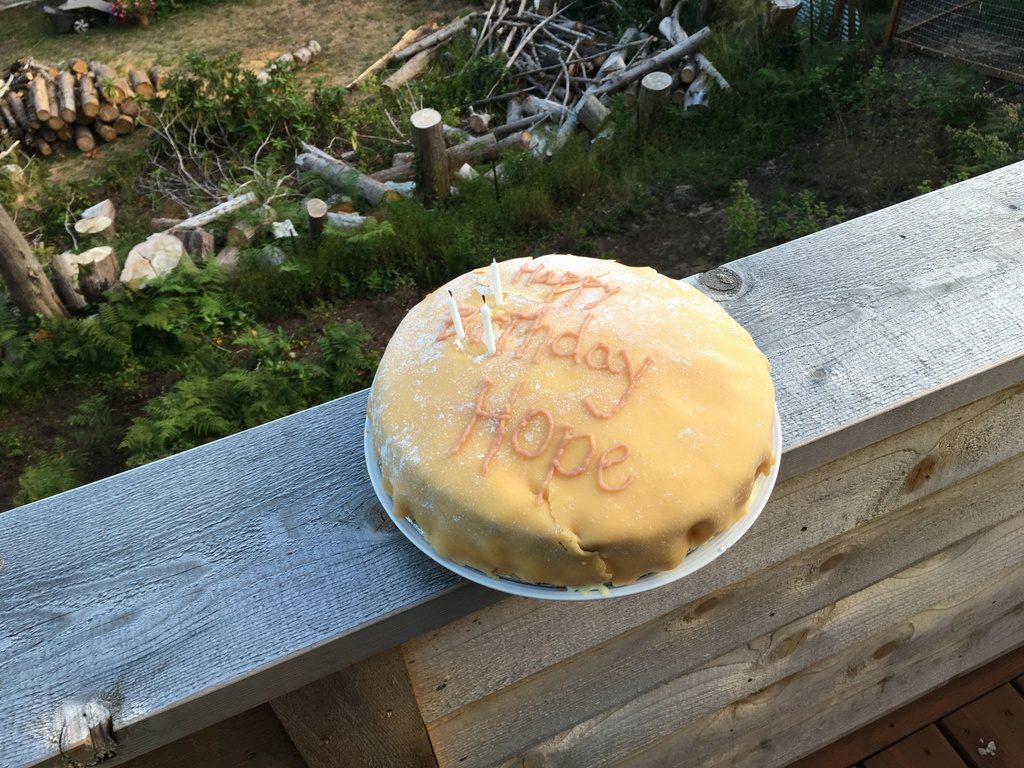 During the trip, my sister celebrated her birthday. My parents made her a Scandinavian princess cake and we had cake by the ocean. 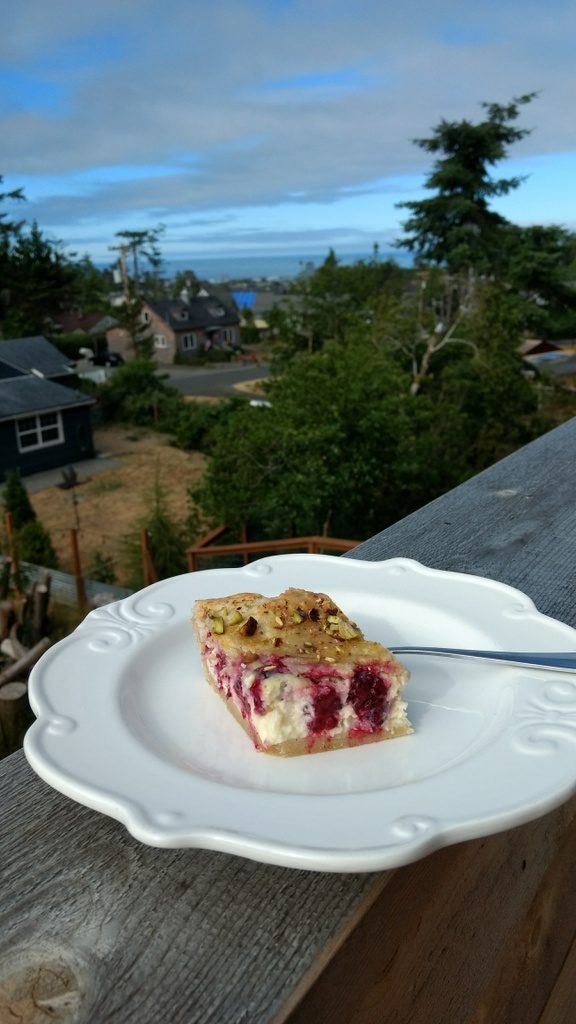 For our last morning, I used the rest of the blackberries to make a Blackberry Cheesecake Galette. It was a perfect way to end our wonderful trip. 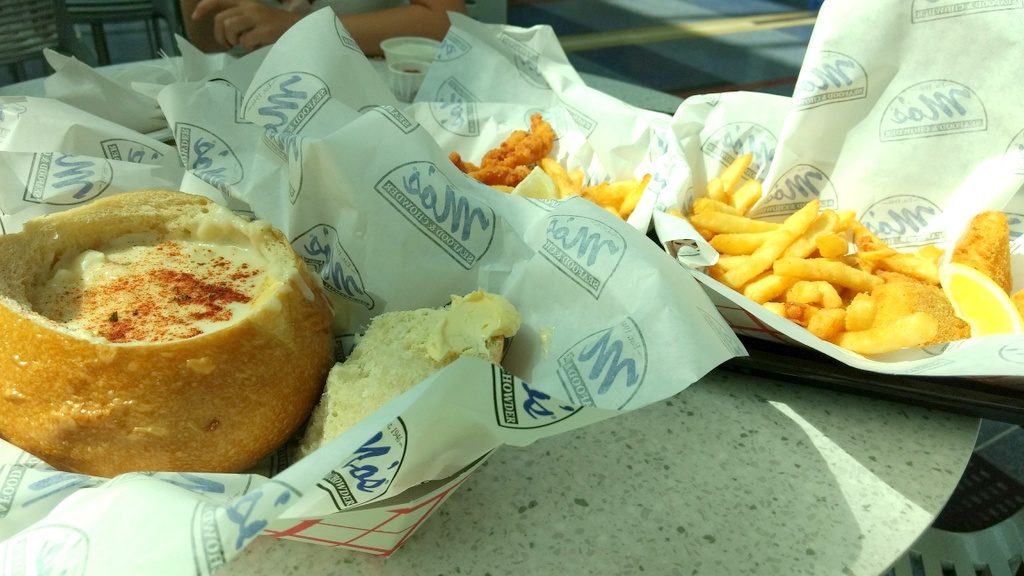 Before we flew out, we grabbed some food at the airport from Mo’s Seafood & Chowder. The clam chowder and fish and chips were really good. Ellen got the kid’s meal with clam strips which was an adventurous alternative to chicken strips (which is what Cooper got). 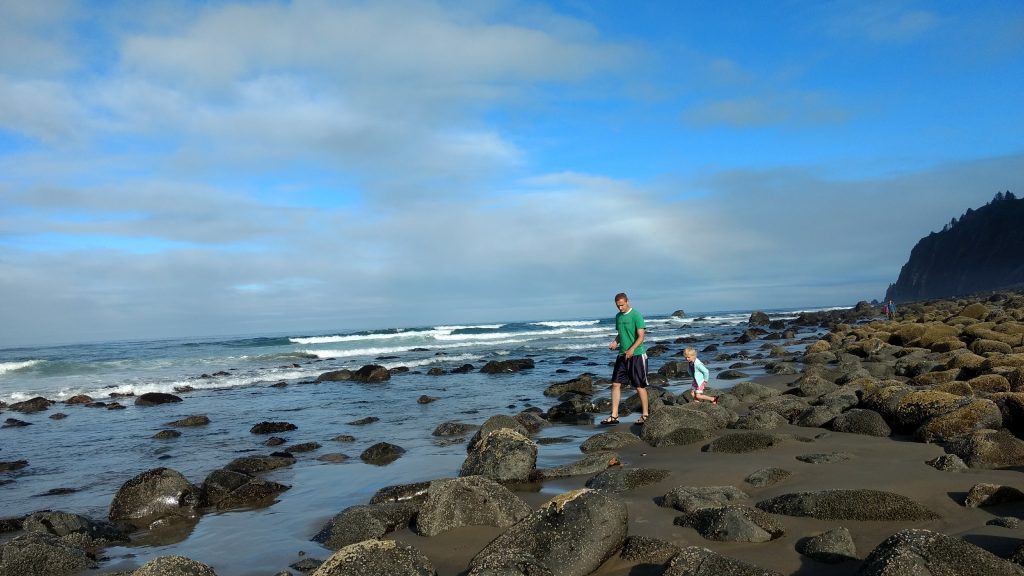 While, our bodies were a little relieved to come home and return to a more predictable and generally healthier diet, we had a blast. It was a rejuvenating trip. I already want to go back.

Backpacking Pasta + Our Favorite Food to Eat on the Trail