I won’t apologize for another mini pie post. We all know that would just be an unnecessary waste of time. This is the third and final type of mini pie we served at a recent church function (the others were pumpkin and pecan). The apple mini pies were not the prettiest of the batch (although that could easily be remedied with a swirl of whipped cream), but they were the only flavor I could sit down and eat a whole tray of. You can be the judge of whether that’s a good thing or bad thing, but personally I’m in the pro camp.

These mini apple pies are based on our crumbly apple pie, but when made tiny they turn into something that is equal parts soul food and fancy. It reminds my tastebuds of a turnover, only more elegant. There is a trade-off that happens with the mini version. The crust is easier to manage, but the topping becomes a little harder. On the full-sized pie you can easily pile it up, but on the mini pie the crumbly topping doesn’t stack quite as well. I finally gave up on trying to make the filling not spill onto the top of the pan. As long as you butter the top of the pan the pies will still slide out and you can break off any topping that juts out in peninsula fashion. (And pop it directly into your mouth of course.) 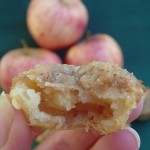 This recipe can also be made using a regular sized muffin tin instead of a mini muffin tin. This will produce a higher filling to crust ratio which isn’t necessarily a bad thing. The recipe yields 8 standard muffin sized pies.

[…] Pecan, pumpkin, or apple pies from Dirty Dish Club  –  For when you want something both delicious and […]