Posted October 6, 2014 by Admin under recipe

I’ve never quite understood how cupcakes became so popular, and I say this having tasted the best of the best. They are cute, yes, but since they don’t offer an improved flavor profile over cake I rarely find the hassle of decorating that many individual cakes and hand washing muffin tins to be worth it when I can make one full-sized cake and eat it with a fork like a civilized person. That might sound harsh, especially since the end of the cupcake boom is still fresh in the hearts of so many. I apologize to any of you that may be mourning, but read on, I have just the thing to help you feel better.

Mini pies are an entirely different story from cupcakes. By making them mini, the ratio of crust to filling greatly increases (by a factor of three to be exact) which is a marvelous thing for all of us crust lovers. Additionally, mini pies are actually much tidier to eat than pie slices. And their final winning attribute: they are adorable. Mini pies are a great option for Thanksgiving. They make it possible for everyone to eat several different kinds of pie without feeling like they’ve missed out because they exercised restraint or like they’re going to die because they didn’t. Now, a word for those of you that are not fans of pecan pie, you have to try these ones. Noel has never been a fan of pecan pie. He found them too sickly sweet and corn syrupy, but when he tried this version made with maple syrup he ate all the pies I’d set aside for him in five seconds flat. 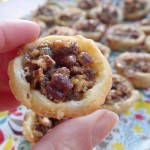 This recipe can also be made using a regular sized muffin tin instead of a mini muffin tin. This will produce a higher filling to crust ratio which isn’t necessarily a bad thing. A standard muffin tin will yield 4 small pies.

[…] women’s social this month, my thoughts gravitated to fall flavors like pumpkin, apple, and pecan and since it was for a gathering of women I knew mini pies would be the perfect “awww” […]

[…] Mini Pecan, pumpkin, or apple pies from Dirty Dish Club  –  For when you want something both delicious and cute. […]