Posted October 12, 2014 by Noel under recipe, Tips and Tricks 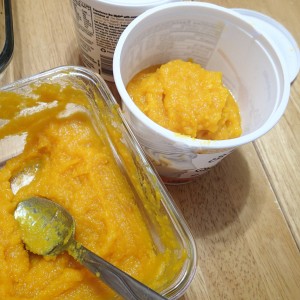 A few years ago I embarked on a quest. A quest to turn a pumpkin into a pie. Up until that point real pumpkins were something you carved faces into for Halloween and then threw away before the neighbors kids got to them, and pies were best left in the capable hands of Marie Calendar, or better yet my aunt Brenda.

I have always had a particular fondness for pumpkin pie complete with a mountain of whipped cream on it. Looking forward to the pumpkin pie was got me through eating stuffing at Thanksgiving dinner. (Stuffing is the worst. I had a bad experience. Let’s just leave it at that.) Naturally, since pumpkin pie is so good I needed to be able to make it myself. Upon looking around for recipes, they all called for the same thing:

Hard pass. Is that stuff even pumpkin? There’s a rumor (which I will propagate even though I have no evidence) that it’s mostly butternut squash. This would not do. Also, there was the bragging rights of being able to say I took a gourd and turned it into a pie. Challenge accepted.

What you read below is the result of several years of research, trial, and error. This puree makes a superior pie and can be used anywhere else canned pumpkin frequents this time of year. A complete pumpkin pie recipe using this puree is forthcoming.

Note: Pumpkin puree can be kept in the fridge for a week or so and in the freezer for several months. If it becomes watery, simply strain out the water. 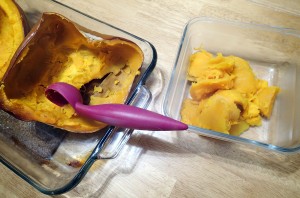 […] bakery pies, in my mind, pumpkin pie was okay at best. It wasn’t until I married Noel and he insisted we attempt to make a pumpkin pie 100% from scratch that I came to really appreciate the potential of a pumpkin pie. At first I was convinced that he […]

[…] conclusion to our pumpkin pie saga. As we learned last time, it is important to start with pumpkin purée that you made from a pumpkin if for no other reason than bragging rights. You may already know that I am a big pumpkin pie fan. […]