Even though my mother made exquisite pies of all kinds, most of the pumpkin pies we ate growing up were store bought. I don’t think my mom is particularly fond of pumpkin pies and since my parents usually won a pie or two every year at the local turkey trot, my mom rarely had a reason to make an obligatory one for Thanksgiving. Having only had super market bakery pies, in my mind, pumpkin pie was okay at best. It wasn’t until I married Noel and he insisted we attempt to make a pumpkin pie 100% from scratch that I came to really appreciate the potential of a pumpkin pie. At first I was convinced that he was insane, but we were newlyweds, so I decided to humor him. That pie turned out to be one of the best pies I have ever eaten and my opinions on pumpkin pie were forever changed.

When planning refreshments for a church women’s social this month, my thoughts gravitated to fall flavors like pumpkin, apple, and pecan and since it was for a gathering of women I knew mini pies would be the perfect “awww” inducing dessert. This particular pie filling doesn’t have an extensive ingredient list and you may be alarmed at the lack of spices, but don’t let that bother you. The pie is sweetened with maple syrup which gives it a depth of flavor that is pleasing in its own right. 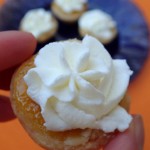 This recipe can also be made using a regular sized muffin tin instead of a mini muffin tin. This will produce a higher filling to crust ratio which isn’t necessarily a bad thing. Using a standard sized muffin tin will yield 6-8 small pies.

[…] This is the third and final type of mini pie we served at a recent church function (the others were pumpkin and pecan). The apple mini pies were not the prettiest of the batch (although that could easily be […]